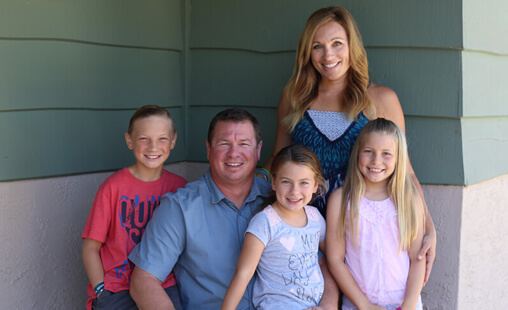 I wasn’t excited to go to church for obvious reasons. I had never been to church. That was never an opportunity my parents gave me as a kid. So, I didn’t know what to expect. I didn’t know how to dress.

How did you find Foothills?

Crystal: My parents started going to Foothills years ago and had invited Dave and I to church a bunch of times. We had never gone. One day I finally just felt this urge [to go]. I’m sure it was God telling me, but at the time I didn’t know. I went with them to church and really, really enjoyed it. The second that I walked in I felt like the minister was speaking to me. That was a great feeling, I think, but also super life-changing.

Dave: I [was] kind of feeling like maybe something was missing. Maybe we sought after things that we thought would create happiness, like a bigger home, and we thought that would, you know, [satisfy us], but I think that we were missing something until we started going to church. Once we started going to church, I felt like it completed our marriage, it completed our family, and it just really felt like home.

Why did you come to Foothills?

Crystal: When my parents asked me this [last] time, which had already probably been 10 times in the past, for some reason I just really felt the urge to go and just try it. I had been to church my whole life and I had kind of walked away from God, and I felt like I knew that there was more that God had for me. So, I went with them and hoped that eventually I could get Dave to go because he had never been to church before.

Dave: I wasn’t excited to go to church for obvious reasons. I had never been to church. That was never an opportunity my parents gave me as a kid. So, I didn’t know what to expect. I didn’t know how to dress. I didn’t know if I was going to show up and say something stupid. It was a huge concern of mine. I didn’t know, like… at the time I worked construction. I had two wardrobes: clean shirts and dirty shirts. And they were all T-shirts. I don’t think I had a button-up shirt, so I was thinking, “Man, I can’t go to church in a T-shirt.” But, you know, we show up and of course we see T-shirts and flip-flops along with suits and ties. It was cool to see how casual it really was.

What did you find at Foothills?

Crystal: I think when we came here, like Dave said, we both always felt like the sermon that we were hearing was speaking to us, and so I felt like we actually just found Jesus. But in finding that, we found so many people that were young families who were going through the same struggles of marriage and money and children and just life struggles that we were. Over time, those people have become very close friends and like family to us. That’s something that I’ve really enjoyed, is just getting to know a lot of people and helping more in the church. And I really, really love the youth program that the church has. That was something that I know my mom always wanted for us when we were kids, and I wanted to give that to my kids. That’s probably why I went the first time because I wanted my kids to have the experience that I had growing up, and I feel like their experience has been much better at Foothills. It’s just all about kids and families and I love it.

Dave: I think we found what we’d call now a family but at the time we found people that were what appeared to be friends for generations. And the conversations we had had with other people, I didn’t know what to expect with that either. I didn’t know if we were going to have to have conversations that were about church or about God, but we found out that we can go to church and just have a normal conversation - before going to church, I didn’t know that was possible. I thought it always had to be discussions about God and discussions about religion. But really, we can just have normal conversations, you know, about fishing over the weekend or work and making great connections with other people that maybe share the same occupation or the same interest. And now you can go share those interests with someone who has the same interests in church and in God. And so it opened up an opportunity for me to spend my personal time, whether it be surfing, fishing, or even doing business, with someone with a like interest within the church. The opportunity that Foothills has given to our kids is really the best thing, I think, that we’ve found it partners with us in helping our children become more faithful and learn more about God. I think that’s one of the biggest things I’ve noticed.

Crystal: I think the realness of people, too. You always have a misconception of church sometimes before you’ve ever gone that, like Dave said, that maybe you’re not going to fit in or you don’t know God the way that they do or that maybe you’ve never read the Bible, but in some way you fit in with people there because everybody is a real person and goes through this life doing a lot of the same things. So, I mean, the common denominator was obviously God and that’s why we stayed, but we love it. We’ve discovered a lot of great things here.